African Union Strives to ensure a Conflict-Free Africa in line with the theme on “Silencing the Guns: Creating Conducive Conditions for Africa’s Development”

African Union Strives to ensure a Conflict-Free Africa in line with the theme on “Silencing the Guns: Creating Conducive Conditions for Africa’s Development” 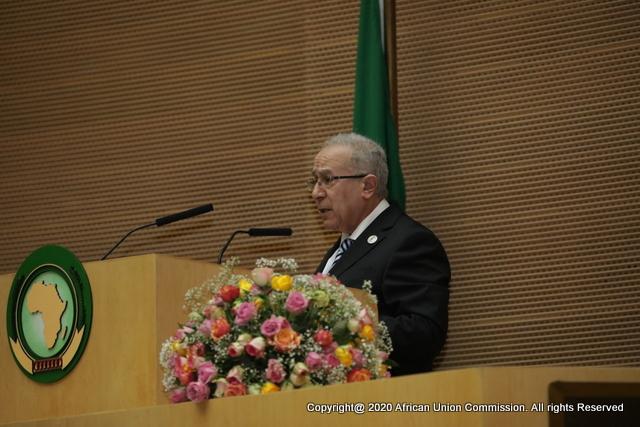 10 February 2020, Addis Ababa, Ethiopia: “Looking at the achievements made in promoting peace and security in the continent, in recent decades, particularly since 2004, with the operationalization of the AU Peace and Security Council, the noble objective of silencing the guns and ending wars in the continent is achievable”, said Amb. Ramtane Lamamra, Special Envoy of the AUC Chairperson, H.E Moussa Faki Mahamat, on Silencing the Guns. He was speaking yesterday 9 February 2020, at the AU Headquarters in Addis Ababa, Ethiopia, while addressing the 33rd Ordinary Session of the Assembly of the African Union on the implementation of the flagship project on silencing the guns within the context of the African Union (AU) theme for 2020, in the presence of the newly elected Chair of the Union H.E Cyril Ramaphosa, President of the Republic of South Africa.

Amb. Lamamra noted that from around 30 active conflicts in 2004, Africa must celebrate the fact that it is now addressing fewer conflicts than in the past. He said Africa has a robust blueprint for promoting peace, security and stability, as well as advancing good governance, respect for human and people’s rights and constitution. This blueprint is the combination of the African Peace and Security Architecture (APSA) and the African Governance Architecture (AGA). The Peace and Security Council has led and continues to effectively lead the implementation of this blueprint, of which the determining factor is the political will of Member States is very crucial given that the prevention and resolution of conflicts is done on national territories. He underlined that, while the respect for national sovereignty is paramount, this should not undermine the efforts to scale up conflict prevention and, if and when necessary, take collective action in the name of the principle of non-indifference as enshrined in the Constitutive Act.

“Cognizant of the fact that civil conflicts are triggered by series of disagreements, disparities within or between individuals, communities and factions, we are faced with the challenges of being more creative in conceptualizing and implementing innovative solutions to conflicts. In this perspective, our focus should primarily be to ensure preservation of national unity, functioning of state institutions and overall sovereignty of the people”. Emphasised Amb Lamamra before stressing that, in this context, it is imperative to conceptualize inclusivity in all facets of conflict resolution as one of the essential ingredients in silencing the guns in the continent. Put in the field, this means involving all layers of society, particularly women and youth. It is an established fact that causes of conflicts in the continent are varied and multifaceted. He said a significant proportion of these conflicts have been predominantly driven by ethnic rivalry over political succession, disagreement over modalities for conduct of national elections or over the outcomes of elections, as well as power struggles within the state. Adding that, conflict also arise due to struggle over control and access to natural resources and the accruing benefits.

According to the AUC Special Envoy on silencing the guns, while we continue to deploy conventional methods of conflict resolution through processes that involve the use of wise Pan-Africanists, international and regional organizations, the involvement of neighbouring countries, peace support operations and civil society organizations, we should be cognizant of the nature, scope and cultural settings of these conflicts. With this approach, one can then forge a tailored comprehensive strategy, including the use of formal and informal mediation mechanisms at the village, community, state, regional and continental levels.

“In other words, lessons learnt underscore the point that convention-centric approaches combined with inclusive local processes is more likely to contribute positively to silencing the guns in the continent. This is obvious in case of conflicts instigated on the preservation of traditional social entities such as extended families, lineages, clans, ‘tribes’, religious brotherhoods and ethno-linguistic groups, etc”. Noted the Special Envoy.

In these types of conflict settings, Amb. Lamamra suggested that, there is need for a hybrid conflict management mechanism that will take into consideration traditional/ indigenous methods of interventions in search for a balanced solution between the centres and the peripheries, in order to preserve national unity with due respect for diversities. The overall objective of this hybrid approach is the preservation of national unity without infraction on the existing religious and linguistic factors.

To that effect, given the experiences gained and the results achieved in the past decade or more, Amb. Lamamra concluded that, the African Union needs more than ever to spearhead and strengthen its conflict mediation efforts and lead action aimed at more operationally bringing together all African and international actors, including the United Nations, in conducting enhanced collaborative efforts to silence the guns and create conducive conditions for socio-economic development in the continent.

This, he said should be translated into concrete steps to be immediately undertaken to silence the guns in Libya, Mali, and the Sahel, Lake Chad Basin, as well as in Somalia and other hotspots. “Africa has the will and ability to defeat terrorism as it defeated colonialism and Apartheid”. Amb. Lamamra further underscored the need to review and adjust Africa’s conflict prevention and resolution tools in order to effectively and efficiently respond to the ever changing nature of conflict, violence and criminality on the continent. He reiterated that “silencing the guns is an achievable task that can help us to promote the sovereignty of our people and further advance our Panafrican integration and development objectives”. (See complete speech of Amb. Lamamra on the summit page of the AU website: www.au.int )