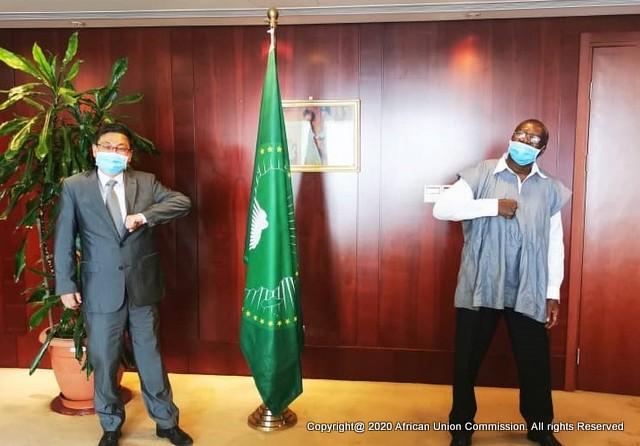 Following the reported incidents of brutalities and related injuries allegedly inflicted on Africans in Guangdong province in the People Republic of China, the Deputy Chairperson of the African Union Commission, HE Mr. Kwesi Quartey invited the Chinese Ambassador to the African Union, H.E. Amb. Liu Yuxi, to the Commission today for a discussion on how the matter would be resolved.

HE Mr Kwesi Quartey informed Amb. Yuxi that given the closeness of the relations between China and Africa, the reported incidences were clearly unacceptable.

In his response, HE Amb. Yuxi reiterated the immense value China places on its relationship with Africa and China’s commitment to protecting and developing this relationship. He registered the regret and embarrassment that the incidents have caused China. Amb. Yuxi recounted steps the Government of China has taken, and continues to take to restore calm and to protect the safety, security and dignity of the African population in China.

H.E. Amb. Liu Yuxi informed the Deputy Chairperson that, the Chinese whose social media post caused the unfortunate incident has been arrested. Also, law enforcement personnel exerting excessive force have been reprimanded and cautioned to exercise restraint whilst discharging their duties. He also mentioned that two hotels have been secured for the affected Africans and the cost would be borne by the Chinese Government. Furthermore, seized passports and personal belongings have been retrieved and handed over to their rightful owners, Amb. Yuxi added.

He expressed overall regret for what had happened and intimated China’s determination to use this as a lesson to improve relations with their African brothers.

Clearly this matter has caused grief, pain and humiliation to all Africans.

Africa values its relationship with China but not at any price. Further act of brutality meted out to Africans will not be countenanced by the African Union and indeed all Africans.