The Young Africans Writing Contest (YAWC) is an ECOSOCC initiative that aims to bridge the gap between African youth and the African Union (AU). ECOSOCC launched the inaugural YAWC in 2021 to connect young Africans to the African Union. Specifically, the YAWC empowers youths to reflect on their contributions to the advancement of the continent and provides them with a free space to articulate themselves.

YAWC 2021 was hugely successful, drawing over a thousand participants from all over the continent. For 2022, ECOSOCC has partnered with GIZ, calling young Africans to pen their ideas around migration and mobility issues on the continent. YAWC 2022, themed: A day in the life of a migrant child, aims to identify the theme’s connection to the AU's Free Movement Protocol (FMP), which was created with the goal of lowering, and eventually eliminating, barriers to Africans crossing regional borders to visit, trade, live, work, and establish businesses in other countries on the continent.

From last year, ECOSOCC and GIZ have been conducting expert webinar series to popularize the Migration Policy Framework for Africa (MPFA) and Plan of Action (2018-2030) as well as the AU Free Movement Protocol within African Civil Society, while also defining the role of African CSOs in advocating and contributing to the implementation of free movement. The outcomes of the webinar series served as the backbone for the conceptualisation of the Policy Booklet on the MPFA.

The aim of the policy booklet is to popularize the migration policies which support free movement and the Migration Policy Framework for Africa (MPFA) that offers AU member states and RECs comprehensive policy guidelines to assist the formulation and implementation of national and regional policies.

He commended ECOSOCC for giving an opportunity to young people to write about the life they want. “The pen is mightier than a sword, the difference between the two is that the pen will win the victory with so much good and the pen you have, writers is the sword of Africa, to develop a better continent,” he said.

Mr. Denise Kodhe, ECOSOCC’s Presiding Officer of ECOSOCC encouraged young African writers to continue to hone their craft by participating in such endeavours. On the topic of migration, Mr. Kodhe said that humanity was at the heart of migration.

“We want a continent that is integrated, so migration has always been part and parcel of African life. We want Africans to travel around the continent freely,” he said.

Head of the ECOSOCC Secretariat, Mr. William Carew, said the launch was significant for many reasons, particularly recognizing the potential of young Africans as a driving force for Africa’s collective prosperity.

On migration, Mr. Carew, said that “It is no longer news that Africa has a teeming young population. In fact, it is predicted that the population of young Africans will double from the current 480 million to reach 840 million by 2050, making Africa the continent with the youngest population in the world.”

He went on to say that while the “growth in our young population presents tremendous development prospects for the continent, conversely, it would present challenges if we fail to create systems to harness the inherent potential of young Africans. Already, our young population is facing the brunt of societal heaves such as unemployment, armed conflict and other forms of violence which has fuelled incidental challenges like illegal immigration to the so-called greener pastures.”

Last year's winner of YAWC, Miss Daniela Odong who graced the event, encouraged young people to take part in the contest, noting that YAWC was an opportunity for young people to speak on issues that mattered to them.

The contest opened on July 16, 2022 and will close at midnight September 16, 2022. Winners will be announced during an Awards Ceremony in November 2022.

The Economic, Social and Cultural Council (ECOSOCC) was established in July 2004 as an Advisory Organ composed of different social and professional groups of AU Member States. The mandate of ECOSOCC is to contribute, through advice, to the effective translation of the objectives, principles and policies of the African Union into concrete programmes, as well as the evaluation of these programmes. 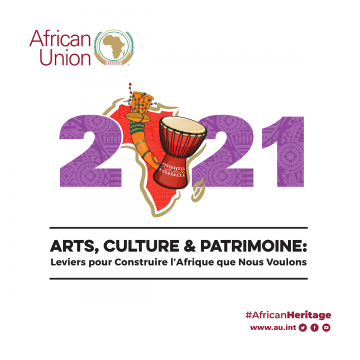