Statement of H.E. Dr. Monique Nsanzabaganwa Deputy Chairperson of the African Union Commission Delivered by Mr Djamel Ghrib Director of EDIT on the occasion of AUC-IMF High-Level Conference on Good Governance and the fight against corruption

Statement of H.E. Dr. Monique Nsanzabaganwa Deputy Chairperson of the African Union Commission Delivered by Mr Djamel Ghrib Director of EDIT on the occasion of AUC-IMF High-Level Conference on Good Governance and the fight against corruption 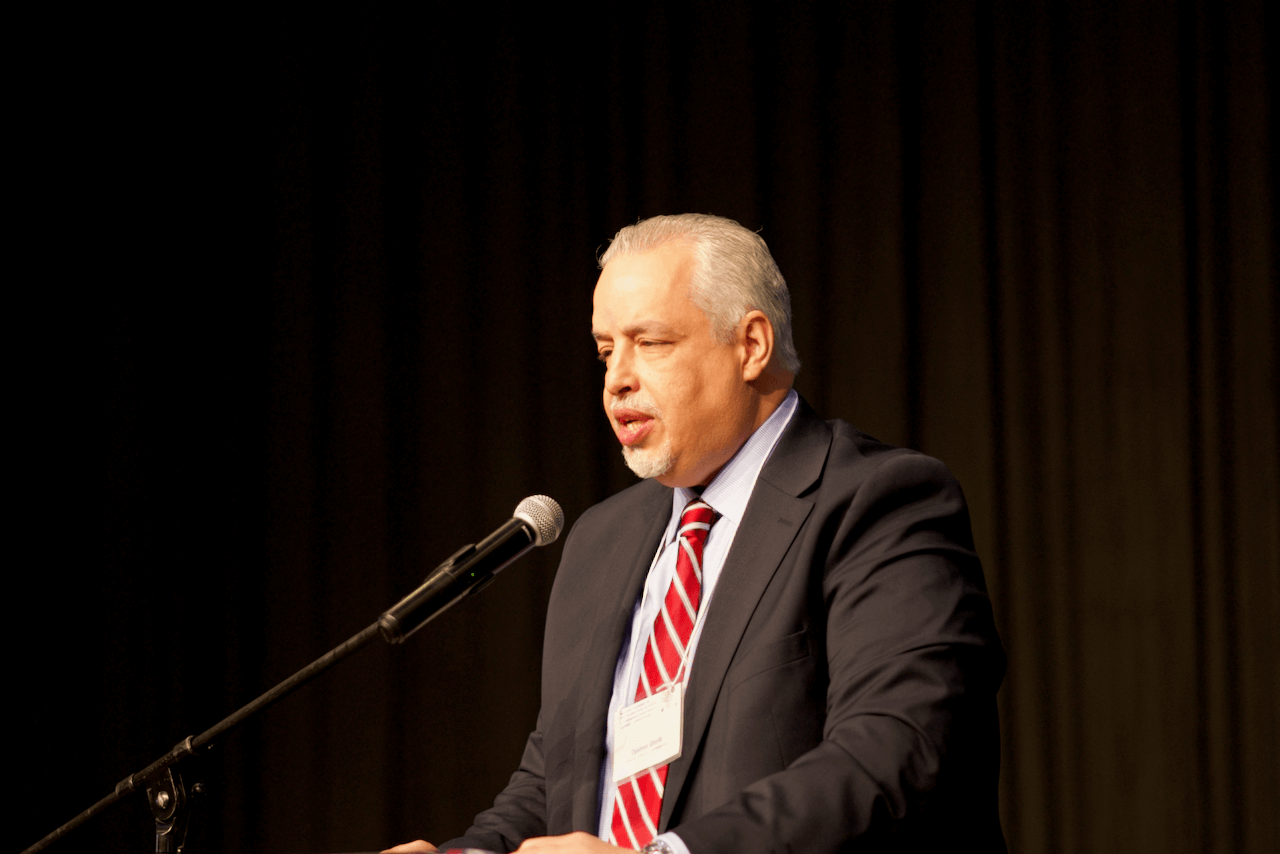 Allow me at the onset, to express our deep gratitude to Ms Antoinette M. Sayeh, the Deputy Managing Director of IMF for having initiated such important, timely and hopefully promising meeting. Indeed, this successful collaboration between IMF, AUC and Bank of Botswana is the testimony that

GOOD GOVERNANCE AND FIGHT AGAINST CORRUPTION. Thank you

to all of our participants for taking the time to contribute to a topic closest to Africa's heart.

Her Excellency, the Deputy Chairperson of the African Union Commission, Dr. Monique Nsanzabaganwa could not be present in Gaborone, the Capital of Botswana, the Land of Smiles and Generosity, because she has other engagement in a member country.

Let me take the opportunity to extend my gratitude to the Government of the Republic of Botswana, the land of smiles, small country by population but large by its governance model for hosting this crucial conference that brought participants from all over the world.

By joining forces with the International Monetary Fund (IMF) and other key stakeholders present here to engage with member countries on governance reform, we are initiating a new pathway not just to benefit our region but hopefully the entire world – something we envisage to become the most potent force to advance our noble goals and the aspirations of the African’s people.

This conference will go through the latest legislation reforms, success stories in promoting good governance and fighting against corruption, and also assess in a transparent and inclusive manners the bottlenecks that hinder the comprehensive implementation of the rules of law which aims at promoting durable governing systems of laws, good governance at the level of the institutions, the benchmarks and norms and community commitment around key deliverables: accountability and responsibility.

African Union Heads of State and Government committed to Africa's transformation by adopting the African Union agenda 2063. – Africa's blueprint and master plan for transforming Africa into the global powerhouse of the future aims to deliver on its inclusive and sustainable development goal. However, this ambitious instrument should be backed up by at least 70% of resources mobilized domestically, including bolstering the fight against illicit money flows and corruption.

"My statement is that corruption has a more devastating consequences on millions of people lives than COVID-19".

As you may know, corruption is undoubtedly the most pressing challenge to African governance and development. It has a devastating and corrosive effect on the continent's progress, stability, and development. It hinders economic growth by discouraging foreign investment, distorting resource allocation and market competition, increasing business costs, and reducing the net value of public expenditure. It also reduces the quality of service and public infrastructure, and tax revenues and encourages the detour and misallocation of scarce resources.

Corruption undermines the rule of law, respect for human rights, accountability, and transparency in the political arena and weakens public institutions. This tarnishes the government's public legitimacy and undermines good governance. The cost implications of corruption are harmful as it contributes to increased income inequality and poverty and negatively affects the moral values of society. Corruption challenges sustainable economic development, peace, and good governance. "We all know the damage caused by corruption.

Common African Position for Asset Recovery (CAPAR), and the Illicit

Financial Flows and Tax Strategy which are new tools to be adopted by the African Union (July 2022). These provide the regional/continental legal framework perspective to which African governments and citizens can refer in their efforts to strengthen their governance institutions and address the problem of corruption. In addition, they can provide a basis for working with other countries in this area.

Allow me to acknowledge the presence in this conference of the Good Governance in Africa network comprising of the following African bodies:

African Tax Administration Forum (ATAF), the Collaborative Africa Budget Reform Initiative (CABRI), the African Organization of Public Accounts Committees (AFROPAC), and the African Organization of Supreme Audit Institutions (AFROSAI). These partners are engaged with the African Union in the fight against corruption and the fight against illicit financial flows. The AU with its key stakeholders and partners will continue to advocate for the speeding up of the implementation of Rule of Laws that ensures the safe handling of public funds and the integrity of government systems.

Almost all countries now have a government agency dedicated to fighting corruption. In addition, many countries have specialized agencies for specific areas of anti-corruption work, such as financial intelligence units to combat money laundering and illicit flows, integrity agencies to combat conflicts of interest and illicit enrichment, and others.

Corruption, however, does not seem to be moving and Africa remains the region most affected by this scourge. The survey found that more than half of citizens surveyed in 35 African countries do perceive that corruption is getting worse in their country. Fifty-nine percent of respondents believe their government is still lagging behind in fighting the corruption.

What else can we do? Today my message is threefold:

First, collective, articulated and integrated approach needs to be envisaged in promoting good governance and fighting against the corruption. The change doesn’t come alone but requires a collective Wake Up Call response from all the stakeholders. I sense that, in the past few years, attitudes have improved and the world's view of corruption appears to have taken an unexpected turn for the better. There is a greater wish to do something to stop it.

Second, we should all take advantage of fourth revolution impact and wave of the element of Trust that has brought to our life. By introducing massively AI and Integrated E-Platforms solutions that provides Checks and Balances in all transactions, we are encouraging the potential impact emerging technologies use and its advantage in bridging the gap between citizen and government.

The opportunity of digitalization to curb corruption is here and we need to take advantage. Indeed, the response to the coronavirus crisis is providing a unique opportunity to “reinvent government”, rebuild trust and accelerate the global fight against corruption, propelled by the smarter use of new technologies and data analytics. Digital transformation is central to recovery plans, which will require agile government and cutting red-tape, but also corruption-proofing reactivation programmes. Digitalisation can disrupt corruption by reducing discretion, increasing transparency, and enabling accountability by dematerialising services and limiting human interactions. Furthermore, it allows for more effective oversight by smarter accountability institutions and data-savvy civil society.

My third argument is actually a promotional campaign. It is an invitation to all of us, to fight against corruption, to join forces and push governments to support implementation of Convention through technical and legal assistance. Even more ambitiously, we aspire to be the world's conscience in the common fight against this scourge.

To finish, I would like to come back where I started: Transparency and accountability are the means by which we shall implement a zero-tolerance approach which is necessary to fight corruption. And concerted action at both the international level and by domestic governments is the only way to achieve those ends.

Corruption is a threat to democracies. On the one hand because it deprives public institutions of huge amounts of money. On the other hand, because it ruins trust in institutions, leading to instability, upheavals, revolution and more.

This is what history tells us about the relationship between checks and balances and corruption.

We look forward to fruitful deliberations but mostly implementable recommendations.

Thank you for your kind attention!

Statement of the African Union Commission Deputy Chairperson and Acting Chairperson, H.E. Dr. Monique Nsanzabaganwa at the Handing Over of COVID-19 Janssen Vaccine (Johnson and Johnson)